A ribbon-cutting ceremony, for the ceremonial opening of Cell 4 regional landfill facility constructed in Karwyderskraal, was held on Friday, 29 March 2019.

The terrain was designed and developed to provide long term landfilling of regular household waste, and the diversion of organic waste which is composted on site.

The Karwyderskraal Landfill Site is the property of the Overberg District Municipality (ODM) and became functional in 2002.

The construction of Cell 4 commenced in June 2018 and required the excavation of 130 000 m³ of clay and covers an area of ± 4.5 hectares. The new cell is approximately 3 to 4 metres deep and will have airspace capacity of 524 000m³ of solid waste which will give the cell a lifespan of approximately 8 years, based on current disposal rates.

Karwyderskraal Landfill site will provide airspace to the user municipalities for many years to come. The life expectancy of the facility is 57 years.

Cell 4, and the facility, complies with stringent conditions set by National and Provincial Government.  Amongst other precautions, a high density, polyethylene plastic liner was installed to ensure the prevention of ground water pollution.

Cell 3 is in the final stage before closure and Cell 4 will be operational in two weeks’ time when Cell 3 receives its last load. 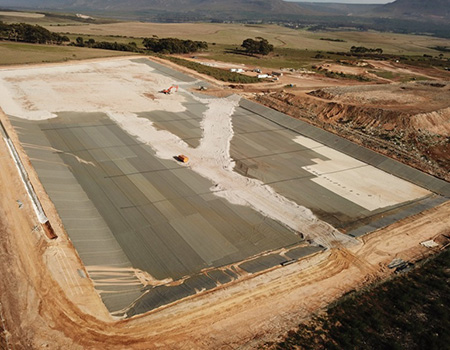 During the opening ceremony an overview of the project was provided by the ODM Municipal Manager, David Beretti, who stated that Karwyderskraal is considered one of the best engineered landfill facilities of its kind and is regularly used as an example of best practice.

He added that "Nationally there is a tremendous scarcity of landfill space, and the construction of Cell 4 has ensured that Overberg is in a very fortunate position.” Beretti said residents of the Overstrand and Theewaterskloof Municipalities can be proud of this facility where they can dispose of their household waste.

He commended Overstrand's Municipal Manager Coenie Groenewald for his invaluable leadership and expertise in compiling the contract; Director: Infrastructure and Planning Stephen Müller and his solid waste management team for their excellent technical experience and the CFO Santie Reyneke-Naudé for her strong reign.

The Executive Mayor of the ODM, Alderman Sakkie Franken, shared in this enthusiasm as he reflected on the shared benefit the communities will get from this landfill site for the next 55 years. He also thanked Provincial Government for paving the way.  “The facility is here to serve the diverse communities of the Overberg and it is something of which to be proud. We hope to include the smaller municipalities like Agulhas and Swellendam for sustainability and increasing the waste management of Overberg.”