The event was well attended and other guests included the Deputy Executive Mayor Cllr Lindile Ntsabo, Mayco members, councillors, members of the public and senior officials of the Overstrand Municipality.

In addition to Grotto Beach, other beaches with Blue Flag status in Overstrand are Hawston, Kleinmond and Castle Beach. At Onrus beach, Blue Flag was raised for the first time.

Blue Flag-status is a well-respected international award signifying that a beach is not only safe and beautiful, but that it is also managed in an environmentally friendly and socially responsible manner.

Accreditation is awarded for one season at a time and municipalities must apply annually to renew the status of their beaches. Furthermore, water samples must be taken at regular intervals and be tested by independent laboratories.

If it is found that conditions at a beach have deteriorated, a beach’s Blue Flag-status can be revoked.

Given that several of Overstrand’s beaches have managed to retain their Blue Flag-status for many years running, Mayor Rabie expressed a special word of thanks to everyone involved as well as the sponsors who support this drive. 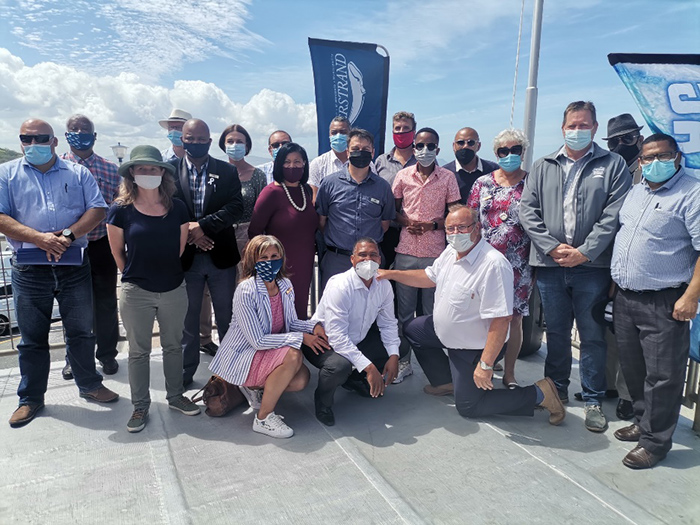 “Flying the Blue Flag signifies that our beaches are open, safe and protected,” the Mayor said, "and I would like to thank everyone for making sure that we retained that status.

“Nevertheless, irrespective of the lengths we go to to ensure that everyone enjoys a safe and pleasant holiday experience, it remains up to beachgoers to act responsibly: Only swim where lifeguards are on duty, follow their instructions and behave courteously towards your fellow beachgoers,” she cautioned.

In South Africa, Blue Flag beaches are mostly operated during the December/January holiday season only. For the duration of the season, lifeguards will be on duty from 09:00 till 18:00, and certain activities such as dog-walking will be prohibited.

In Overstrand, Blue Flag-status will remain effective from 1 December 2021 till 16 January 2022 for Onrus, Hawston, Kleinmond and Castle Beach and until 31 March 2022 for Grotto.