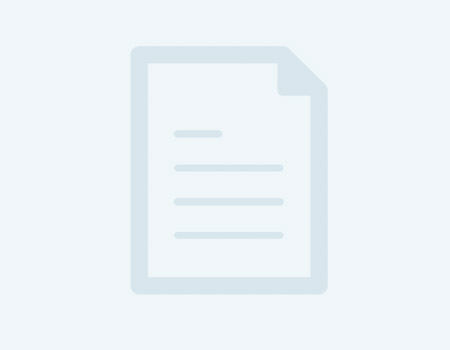 The recent deluge of fires across the Overstrand, has seen an increase in calls for assistance being placed by the public to the Overstrand Municipality’s Emergency Services.  While the relevant personnel are readily on hand and suitably equipped to assist, they are, at times, being hampered in performing their duties and delivering a speedy and efficient service.  This is due, in part, to the inability to find affected residential properties, sites or business premises where road signs have been damaged or removed or street numbers are not adequately displayed.

Executive Mayor, Nicolette Botha-Guthrie, has therefore made an appeal to residents and business owners in the region to please assist the Municipality by ensuring that the street numbers of their respective properties are clearly displayed.  “Unless your house or property number is visibly displayed, calling an ambulance, fire brigade or the police in the event of an emergency will be of no use at all.  If these emergency services cannot find you, then they can’t assist and valuable time, which could be used to save a life or your property, would have been wasted,” said the Mayor. 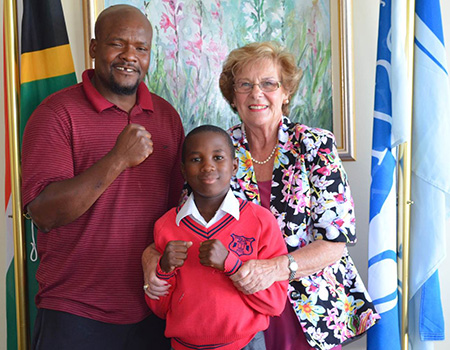 Akhule Mgoqi, a grade-five learner at Zwelihle Primary has not always had the easiest existence.  But, the lack of money or resources has done little to stymie the spirit and enthusiasm of the plucky 12-year old who dreams of becoming an international boxing champ just like his idol, Floyd Mayweather.

Though slight in build, Mqoqi’s speed and ability to place well-timed punches while craftily ducking blows from opponents has seen him copping significant awards at the various tournaments and boxing academies he’s competed in.  Of note, despite having very little time to prepare, he obtained a silver medal at a national boxing competition held in Gauteng in June last year.  It was here that he caught the eye of officials of the South African National Boxing Organisation (SANABO) and has since been selected to participate in a series of SANABO training camps aimed at grooming young up and coming boxers that will hopefully, in time, be part of the national athletic squad set to compete at the 2022 Commonwealth Games in Durban. 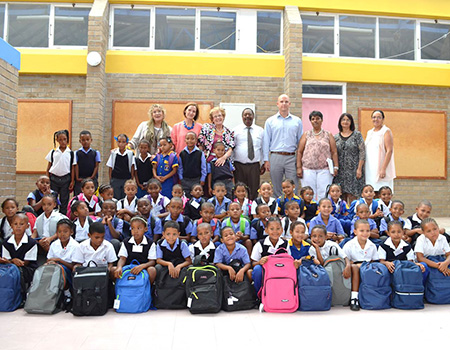 The sweltering early morning heat and rising temperatures did little to dampen the spirits of a boisterous group of grade-one learners at Mount Pleasant Primary on Tuesday, 19 January when they became the recipients of stationery laden backpacks, courtesy of the Ward 4 Backpack Project.   More than 50 backpacks filled with prescribed stationery were handed over to the young learners by Michael Cardo, MP: Shadow Minister of Economic Development and Nicolette Botha-Guthrie, Overstrand’s Executive Mayor.

Also in attendance at the specially marked ceremony at Mount Pleasant Primary School was Ward 4 Councillor Lianda Beyers-Cronjé, the project initiator and co-ordinator who, along with Ann Wright the Manager of Sustainable Futures Trust, has played a pivotal role in marketing and garnering much-needed funds in support of the project.

For some, the moment proved overwhelming.  “This is the first time I have a bag to call my own.  It even has a whole pack of paper – and there’re pencils, a scissors, crayons, a colour-in book, a ruler and so much more.  And this is all for me,” remarked one of the grade one learners.  A feeling that seemed to echo throughout. 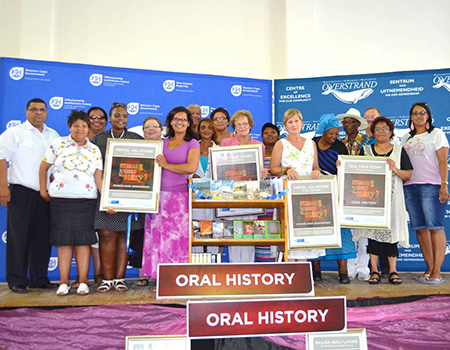 The soaring barometer on Friday, 4 December 2015, did little to dull the senses or enthusiasm of attendees at the momentous “Oral History Initiative Launch” that was rolled out at the Thusong Centre in Hawston by Western Cape Minister of Cultural Affairs and Sport, Anroux Marais.

On arrival, the Minister and the area’s Executive Mayor, Nicolette Botha-Guthrie, were treated to a lively and heart-warming cultural ensemble provided by the Siyazama Dance Group, comprised mostly of a number of traditionally-clad “senior youth” from the district.

The impetus behind the Oral History Initiative is to integrate the various components of the Department of Cultural Affairs and Sport (DCAS) by documenting the stories behind the vast array of communities dotted across the Western Cape. The exercise will afford local community members, including sports legends, the opportunity to not only share personal stories amongst themselves, but to have these all too important recollections that capture the essence of the towns involved, committed to the annals of history. This will also, in turn, allow all South Africans, and the world at large, insight into the many diverse and varied cultures that make up the Rainbow Nation. 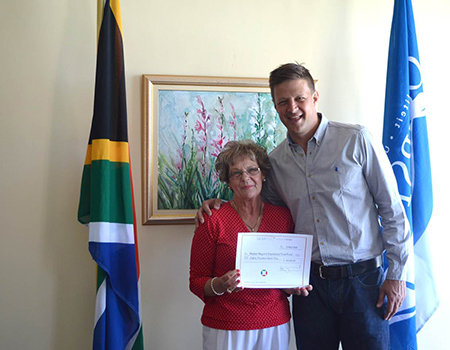 Excitement filled the air on Tuesday, 15 December 2015 as Executive Mayor Nicolette Botha-Guthrie received a cheque from former-Springbok Captain, and Overstrand Ambassador of Tourism, Bob Skinstad in the amount of R80,000, being the proceeds raised at the 2015 Seartec-Overstrand Classic Golf Challenge that took place in November at the picturesque Arabella Country Estate and Golf Club.

These funds, garnered through Mayoral investment vehicle, the Nicolette Trust Fund, together with contributions from title sponsor Seartec (distributor of Sharp products) and substantial donor the Spar Retail Group, will once again be used to resource specifically earmarked Early Childhood Development centres (ECD) with essential items to promote a safe, healthy, stimulating and holistic learning environment for the young children in their care.

This well-attended and -supported annual charity event was borne from a conversation held between Botha-Guthrie and Skinstad a few years back on how best they could ‘pay it forward’, whilst in the same instance doing something significant in their official capacity that would make a difference in the lives and environment of the Overstrand and its people. To this end, the communications and events management services of Sue Anderson, Seartec’s and simultaneously Bob Skinstad’s Public Relations Manager, was engaged and the inaugural Seartec-Overstrand Classic Golf Challenge subsequently kicked off to a resounding start in December last year.