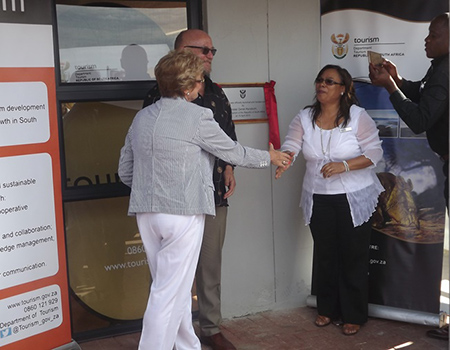 Following on extensive public participation and years of dealing with complex challenges involving several amendments to the site plans, the Stony Point Eco-centre in Betty’s Bay is now finally geared to deliver the project’s intended benefits to endangered seabirds, tourists, the Betty's Bay Boat Club and the Mooiuitsig Community Trust who hold the commercial rights to manage the coffee shop and eco-centre.

At the official launch on Friday 10 April 2015, Mayor Nicolette Botha-Guthrie lauded project managers Casidra for successfully integrating the remaining ruins of the old whaling station, the World War II radar station and the municipal workshop and stores into a prominent tourist attraction and nature conservation area.

With the aid of funding from the Extended Public Works Programme, the Western Cape Department of Tourism facilitated the construction of a themed visitor information centre, a tearoom and a heritage site for whaling history at the Stony Point Eco-centre. 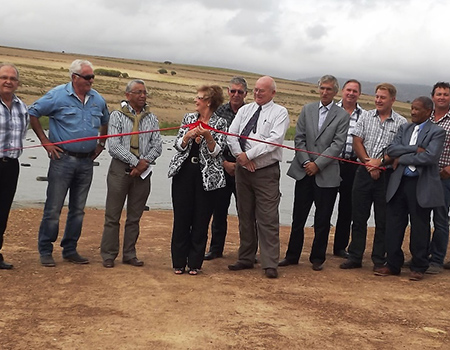 On 2 April 2015, Mayor Nicolette Botha-Guthrie officially opened the new cell at the Karwyderskraal landfill site. In her address, she referred amongst others to the successful negotiations between all affected parties and the excellent cooperation between municipalities and the province in order to attain a common goal, namely to reopen and utilise this landfill site to the benefit of all rate payers.

One of the benefits brought about by the opening of the new cell is that more than one municipality can make use of the landfill site. Of course it will also no longer be necessary to transport the western towns’ refuse to Gansbaai, resulting in a much reduced carbon footprint and extending the lifetime of the Gansbaai cell considerably due to the reduced volumes of refuse being transported to that landfill site.

The project costs amounting to R9,3 million were funded by Overstrand Municipality as well as with a contribution coming from the Department of Local Government’s municipal infrastructure grant, for which the municipality is most thankful. 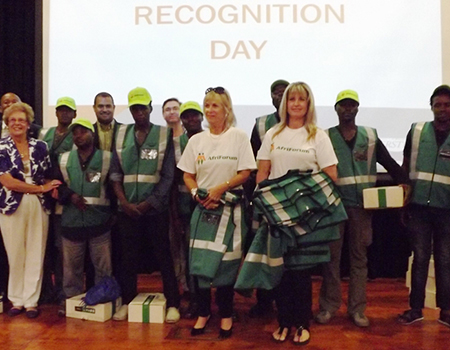 On Tuesday 1 April, Overstrand’s informal car guards and parking wardens finally got the recognition they deserve. At an event hosted jointly by Overstrand Municipality, SAPS, the Department of Community Safety and AfriForum in the Hermanus Auditorium, Mayor Nicolette Botha-Guthrie thanked this team of Overstrand “ambassadors” for a job well done and for their ongoing dedication and commitment to serve the public.

As part of a programme initiated by AfriForum to formalise the employment of car guards and parking wardens, the team underwent extensive training including a course in First Aid which will greatly assist their ability to deal with unforeseen emergencies on the spot. As the Director of Protection Services, Neville Michaels, put it, “a warden’s duty is to assist the public, be an asset to Hermanus Tourism and make Hermanus proud”.

Most importantly, though, the team has just completed their first three months of official employment.

The public meetings will take place on the dates and time as indicated below: 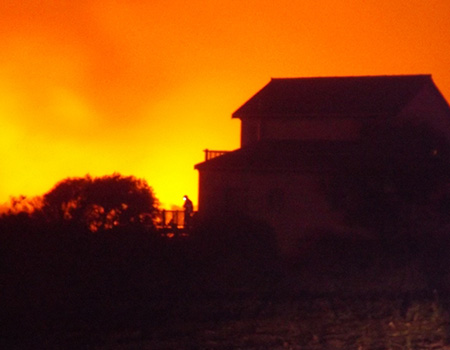 At the council meeting held in the Banqueting Hall on Wednesday, 25 March 2015, Mayor Ald Nicolette Botha-Guthrie thanked all staff members of the Overstrand, councilors, stakeholders, assisting municipalities and the broader community for the role played during the fire recently.

The fire started about a month ago in the area and was managed successfully by the fire fighters of the Overstrand; unfortunately   another fire broke out at Karwyderskraal area over the past weekend.

Mayor Nicolette Botha-Guthrie extended a thank you to all the ladies who cooked meals for the firefighters following sleepless nights of battling with the fires. She also extended her gratitude to the following people: members of public for their role in assisting, to councilors who assisted in their respective areas and other municipalities that assisted in the fire fighting operations.  The Mayor closed off by saying a formal thank you letter will be written to all stakeholders on our appreciation. Immediately after, the Mayor thanked personnel for the hard work in producing in-house quality documents and mentioned the importance of these documents and what it means to the councilors, she immediately, tabled the following documents to the council: